Flights across Europe are expected to return to "100 percent" on Thursday --seven days after ash from an Icelandic volcano forced the shutdown of airspace and stranded thousands of passengers around the world, the air traffic agency Eurocontrol said. 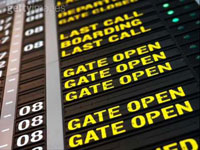 The mood among passengers was one of cautious optimism. After days of endless waiting, many reserved their celebrations for when they were airborne, according to CNN.

Flights across Europe had been suspended for fear that ash from the volcano under the Eyjafjallajoekull glacier could turn into a glassy substance inside jet engines, damaging them.

Since the start of the airport closures last Thursday, three million passengers had their flights cancelled, the German airport associations said. More than half of the 190,000 flights scheduled to take off in Europe in the last week were cancelled, Eurocontrol said.

On Sunday, the peak of the shutdown, 80 percent of flights in Europe failed to take off.