Argentina's last dictator has been convicted over torture and kidnappings committed during the nation's 1976-1983 military regime and sentenced to 25 years in prison. 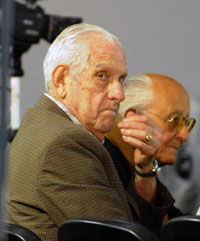 Reynaldo Bignone, 82, was convicted along with five other former military officers for 56 cases involving torture, illegal detentions and other crimes in one of Argentina's largest torture centres, the Campo de Mayo military base, The Press Association news agency says.

An Argentine court was told that during his 1982-1983 rule, Bignone was responsible for torture carried out at Campo de Mayo, an army base on the outskirts of the capital.

Over 4,000 dictatorship opponents were held at the Campo de Mayo execution and torture centre. Bignone was in power directly following Argentina's disastrous 1982 war against Britain over the Falkland Islands, Buenos Aires News informs.