Lukashenko planned to give asylum to Bakiev

Ousted Kyrgyzstan President Kurmanbek Bakiev is now in Belarus, Belarus President Alexander Lukashenko said on Tuesday. Bakiev and his family were in the Belarus capital of Minsk as of Monday night, Lukashenko said, according to the country's state-run news agency. 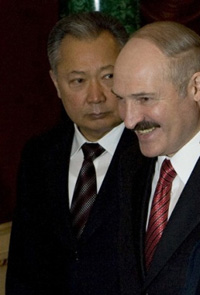 Lukashenko planned to give asylum to Bakiev

Lukashenko, who made the announcement to the country's parliament after his state of the nation address in Minsk, had been saying he planned to give asylum to Bakiev, CNN International reports.

Bakiyev was deposed after the uprising in Bishkek, in which 83 people died after government forces opened fire on the crowds, TODAYonline informs.