A solemn Mass was celebrated in the city's main cathedral Sunday for President Lech Kaczynski, an unyielding Polish nationalist who died along with his wife, Maria, and 94 others in a plane crash in western Russia. 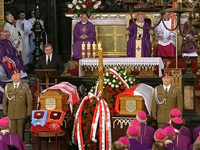 The memorial ceremonies, including burial in a crypt at the Wawel Castle reserved for Polish monarchs and national heroes, were conducted without the presence of President Obama and many other world leaders, who were unable to fly in because a giant cloud of ash from an Icelandic volcano drifted in the skies over Western Europe, The Washington Post says .

Russian President Dmitry Medvedev, who attended Kaczynski's burial April 18 in the city of Krakow, has suggested that the tragedy of the April 10 crash could help bring the Polish and Russian peoples closer.

Later, it was announced that Poland's interim President Bronislaw Komorowski had accepted an invitation from Medvedev to attend May 9 ceremonies in Moscow marking the 65th anniversary of victory in World War II, RadioFreeEurope/RadioLiberty informs.