Volcanic Eruptions in Iceland May Disrupt Air Travel for Months

Volcanic eruptions in Iceland which this week caused thousands of flights to be canceled may continue for months, disrupting European air traffic as ash is sporadically blown above the continent’s busiest airports. 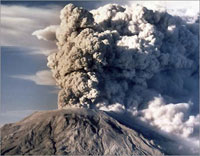 Volcanic Eruptions in Iceland May Disrupt Air Travel for Months

More than 20,000 flights have been grounded after an April 14 eruption of the 1,666-meter (5,466-foot) Eyjafjallajökull volcano sent dust billowing across thousands of miles of European airspace and closed terminals from Dublin to Moscow, Business Week informs.

A geologist says activity has increased at an erupting Icelandic volcano, causing an ash plume to rise some 8.5 kilometers (5.3 miles) into the air.

Magnus Tumi Gudmundsson of the University of Iceland says winds have cleared visibility for scientists and Saturday will be the first day they can fly above the volcano to assess the activity.

Once scientists determine how much ice has melted, it will be easier to say how long the eruption could last, The Associated Press reported.