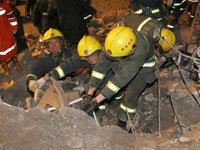 Hu's hasty departure forced organizers of a summit here involving Brazil, Russia, India and China to bring the event forward a day to Thursday so he could participate before flying out, AFP reports.

Rescue teams joined shovel-wielding monks in this devastated county seat on Thursday, a day after an earthquake that killed more than 700 people, as frigid temperatures threatened to claim hundreds more who remained missing, trapped beneath debris for more than a day.

Fifteen thousand homes here were reported destroyed, and despite the truckloads of supplies the government sent lumbering into the region, many survivors had little food and water and only makeshift shelter, according to New York Times.