President Barack Obama signs a nuclear-arms treaty with Russia today that he will try to use to build international support for increasing pressure on Iran and preventing terrorists from getting atomic material. 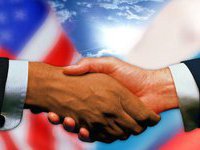 Obama and Russian President Dmitry Medvedev will gather at noon for a ceremony in Prague to cap the deal. U.S. officials have said the new Strategic Arms Reduction Treaty, which trims the U.S. and Russian arsenals by about 30 percent, bolsters the American commitment to Non-Proliferation Treaty obligations and will encourage other countries to demand compliance, Business Week reported.

According to NPR, the New START agreement that President Obama and his Russian counterpart are signing was more than a year in the making. The two leaders hoped to have it signed by last December, when the old START treaty expired. There were fits and starts before a final telephone call sealed the deal two weeks ago. Secretary of State Hillary Clinton says that in the end patient diplomacy produced a treaty with real results.

"It says to our country, the Cold War really is behind us and these massive nuclear arsenals that both our countries maintained as part of deterrence no longer have to be so big," Clinton said. "We can begin to cut that."

Foreign Minister Sergei Lavrov said Russia shared the goal of a world without nuclear arms, which Obama set out in Prague a year ago, but made clear that Russia wanted assurances that it would not end up at a strategic disadvantage.

"We believe the ultimate goal of a world without nuclear weapons is very important," Lavrov told a news conference. "But it's clear that it is impossible to move toward that goal in a vacuum.

"We are convinced that to speak seriously about practical steps toward a world without nuclear weapons, one must pay attention to a whole series of factors that could destabilize global strategic stability," he said, The Moscow Times reported.