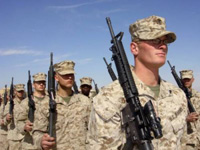 It says its troops entered a house in Paktia province, believing an armed Taliban fighter was inside, reports Australia Network News.

NATO forces said they killed 10 militants in a raid on a compound near the Pakistani border early Monday, while gunmen seriously wounded an Afghan provincial councilwoman in a drive-by shooting in the country's increasingly violent north.

Meanwhile, NATO confirmed that international troops were responsible for the deaths of five civilians, including three women, in February. Such killings have inflamed frictions between the government of President Hamid Karzai and his Western backers.

A NATO statement said a joint international-Afghan patrol fired on two men mistakenly believed to be insurgents in the Feb. 12 incident in Gardez, south of Kabul. It said the three women were "accidentally killed as a result of the joint force firing at the men.", says Associated Press.