The small gang of Somali pirates fired on an approaching ship, hoping their midnight attack would bring them millions in ransom. The ragtag bandits, though, had taken on far more than they could handle: a U.S. warship. 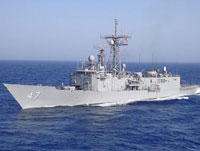 The USS Nicholas, a guided missile frigate, was tracking the pirates when they opened fire early Thursday in Indian Ocean waters, the U.S. military said. The Nicholas, which saw combat in the first Gulf War, returned fire and disabled the skiff.

Navy personnel later boarded and detained three suspects. The Americans found two more bandits on a nearby mothership and later sank the skiff.

It was not the first attack against a Navy ship, but it underscored the fact that most pirates aren't terribly sophisticated, said Roger Middleton, a piracy expert at the British think tank Chatham House, The Associated Press reported.

Thursday's attack came nearly a year after pirates boarded the Maersk Alabama and took its captain hostage, the first assault on a U.S.-registered ship off Africa in more than 200 years. A U.S. rescue operation ended when Navy snipers shot dead three pirates in a lifeboat, with the captain tied up a few feet away.

Last year, 406 incidents of piracy and armed robbery were reported, according to the International Maritime Bureau. Somalis accounted for more than half of those incidents, Washington Post informed.

According to Spreadit.org, American, Richard Phillips was taken hostage a year ago, when a U.S. ship was attacked. Eventually he was reunited with his fellow colleagues when Navy SEAL snipers managed to shoot three pirates dead and get him back on board.

The Government is sure that this will not be the last attack and are continuously looking for ways to improve the security in East African waters.