India kicked off the national census of its billion-plus population Thursday with a 2.5 million strong army of census-takers fanning out across the country to conduct what has been billed the world's largest administrative exercise. 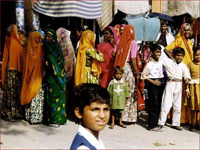 The census, conducted every 10 years, has a new element this year with the collection of biometric data in which every citizen over the age of 15 will be photographed and fingerprinted, information that will form the base of a new National Population Register of the country's 1.2 billion population.

"It is for the first time in human history that an attempt is being made to identify, count, enumerate and record and eventually issue an identity card to 1.2 billion people," Home Minister Palaniappan Chidambaram said.

So far, India has not had a system of issuing a national identity number or card to its citizens. The collection of biometric data using a combination of fingerprint and facial identification will be linked with another massive exercise launched last year to ensure that every Indian gets assigned a single identity number, Associated Press says.

The first will be carried out from April to September this year and will include house-listing, which records information on homes.

The second phase, which involves physical count of residents, will then take place February 9-28 next year.

The exercise is considered a formidable challenge to the world's second biggest population, which has a vast geographical area, widespread illiteracy, and people with a bewildering diversity of cultures, languages and customs, Press TV reports.