South Korea's defense minister says North Korea may have intentionally floated a mine to damage a naval ship that exploded and sank this week. 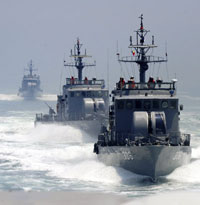 Forty-six crew members are missing and believed trapped within the wreckage of the ship, which went down Friday. Fifty-eight were rescued.

While the cause of the explosion is unknown, Defense Minister Kim Tae-young told lawmakers in Seoul on Monday that rival North Korea may have floated a mine toward the ship. He also said the explosion could have been caused by a mine placed during the Korean War.

South Korean officials had earlier said they did not believe the North was behind the explosion, The Associated Press reported.

The Seoul government has not directly blamed North Korea for the mysterious explosion on the Cheonan, a 1200 ton corvette which sank off Baengnyeong Island, as it patrolled in the Yellow Sea late on Friday night. But the defence minister, Kim Tae Young, said yesterday that it could have been caused by one of thousands of Soviet maritime mines set by the North during the 1950-53 Korean War.

"Though many mines were removed, it must have been impossible to retrieve them all," Mr Kim said. "Or we have to see whether North Korea has intentionally set a mine adrift." But he did not rule out the possibility of an accident involving the torpedoes, missiles and depth charges with which the Cheonan was armed.

Twenty South Korean ships, and one from the United States navy, continued to search yesterday for the missing sailors. Divers who banged on the submerged hull of one half of the vessel heard no answering reply, Times Online reported.

Four U.S. ships – including the USNS Salvor, a rescue and salvage ship that includes an elite team of 16 divers capable of dives up to 300 feet – arrived to help. Two destroyers, the USS Curtis Wilbur and USS Lassen, and a cruiser, the USS Shiloh, are also providing divers, helicopters and command support.

"We were asked to help by the South Korean government and we will remain there for as long as they need us," said Lt. Anthony J. Falvo, spokesman for the U.S. Seventh Fleet in Japan.

The U.S. ships, based in Japan and Hawaii, were in South Korean waters last week for a five-day annual training exercise with the South Korean navy. The exercise was cut short one day when South Korea responded to the Cheonan's sinking, Wall Street Journal reported.