Yulia Tymoshenko Intends to Stay for Next Term as PM

Ukrainian Prime Minister Yulia Tymoshenko withdrew her appeal case against the elections results from the Supreme Administrative court and the court has closed the case. But she has not conceded. 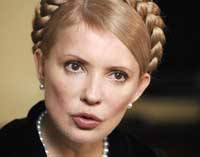 Yulia Tymoshenko Intends to Stay for Next Term as PM

She said once again that Viktor Yanukovych will never be considered Ukraine's legitimately elected president.

This is in stark contrast to her fellow Orange Revolutionary - incumbent Ukrainian President Viktor Yushchenko.

On Saturday he finally congratulated his long-time rival, Mr Yanukovych, on a legitimate victory.

Sergei Mishchenko, an MP from Mrs Tymoshenko's party, has said their party is planning to boycott the inauguration ceremony scheduled for 25 February.

He also added Mrs Tymoshenko is not giving in, she will not recognise the elections results and she will continue to work as prime minister.

Mr Yanukovych has asked Mrs Tymoshenko to step down from her post on several occasions. And she has refused to obey.

As president, Mr Yanukovych does not have the right to fire or to appoint a prime minister - that is up to Ukraine's parliament.

At the moment Mrs Tymoshenko's party is still part of the parliamentary coalition, but negotiations are under way to form a new coalition based on Mr Yanukovych's Regions Party.

One of the leaders of the Regions Party, Nikolai Azarov, speaking to Ukrainian TV channel Inter, said it was fantastic to even consider the possibility of Mrs Tymoshenko remaining in her post for much longer.

But no-one in Ukraine thinks it will be an easy task to remove her.