India and Pakistan are making a fresh attempt to soothe ties strained by the 2008 Mumbai attacks, amid a growing realization that a stable relationship between the two South Asian rivals is key to resolving the Afghan crisis in the region. 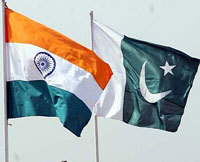 Top diplomats from the two countries are meeting in New Delhi in their first formal dialogue in more than a year, CNN reports.

For India, which made the offer to start the talks, merely returning to formal diplomacy stirred domestic controversy as well as confusion. The offer underscored how advancing the Pakistan issue has become a personal priority — and a political risk — for the Indian prime minister, Manmohan Singh, New York Times reports.

According to Bloomber, for the U.S., Pakistan is an "indispensable player as far as a resolution in Afghanistan is concerned," Zorawar Daulet Singh, an international relations analyst at the New Delhi-based Centre for Policy Alternatives, said. "This gives Pakistan a significant amount of leverage that they are trying to use to seek concessions" in disputes with India, he said.

"While we would like to see India and Pakistan reach a stable relationship, they will do so on their own terms at the appropriate time," Robert Blake, the U.S. assistant secretary of state for South and Central Asia, said in a Feb. 18 speech to the Chicago Council on Global Affairs.