Ukraine is Kept in Suspence after Presidential Election

Ukraine is waiting for Prime Minister Yulia Tymoshenko to either contest results from Sunday's presidential election, or accept defeat and quit. 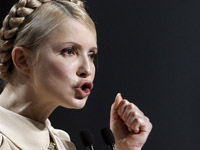 Ukraine is Kept in Suspence after Presidential Election

Pro-Moscow opposition leader Viktor Yanukovych appears to have narrowly won the poll, which monitors have praised.

But she has stayed tight-lipped amid calls by international observers for a peaceful transition of power.

Mrs Tymoshenko, 49, accused her rival of foul play on Sunday evening, but did not repeat an earlier threat to call her supporters out on to the streets in a repeat of the 2004 Orange Revolution that thrust her to power.

According to some insiders in Kiev there are very few who believe Mrs Tymoshenko could muster any serious number of protestors to back her cause. And she is under pressure to make a decision sooner rather than later.

Mr Yanukovych was a presidential candidate in the 2004 election, but was swept aside when the vote was found to have been rigged in his favour.

On Monday, his supporters gathered in front of the Central Election Commission in victory, but also to protest about the failure of Mrs Tymoshenko to accept defeat and resign as prime minister.

The EU foreign affairs chief, Catherine Ashton, said the EU was prepared to work with the new president.

"The European Union remains committed to deepening the relationship with Ukraine and supporting it in implementing its reform agenda.

With more than 99% of votes counted, Mr Yanukovych was estimated to be ahead on some 48.83% of the vote, while Mrs Tymoshenko had around 45.59%.