Australia to Tighten Control over Flow of Foreign Students 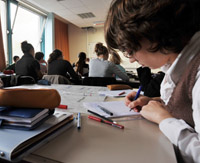 Australia to Tighten Control over Flow of Foreign Students

Australia on Monday axed 20,000 migrant applications in a major overhaul aimed at clamping down on foreign students gaining permanent residency through courses such as hairdressing and cookery.

Immigration Minister Chris Evans said the reforms, would give priority to migrants with higher skills.

Evans said about 20,000 overseas applicants would have their fees refunded at a cost of 14 million dollars (12 million US), while new rules would require better English skills and target the "best and brightest".

The sector has been hit by widespread allegations of shoddy practice and visa scams by migration agents, with several institutions forced to close last year.

Evans said the current Migration Occupations in Demand List (MODL) had prompted a massive influx in foreign students attending courses that put them in line for permanent residency.

"We had tens of thousands of students studying cookery and accounting and hairdressing because that was on the list, those subjects were on the list and that got them through to permanent residency," he told ABC radio.

Australia attracted some 117,000 Indian students in the year to October, about 19 percent of foreign enrolments. Other major source countries include China, South Korea, Nepal, Thailand and Brazil.

Hundreds of Indians have been robbed and assaulted in Australia over the past 18 months, prompting allegations of racism and media outrage in the South Asian country.

Britain last week said it would slash its number of foreign visa students and raise English requirements to stop people coming to the country to work illegally.