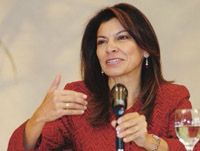 Initial results from Sunday's vote gave her an almost unassailable lead and the main opposition contender, Otton Solis, has conceded.

With 47% of votes, Mrs Chinchilla, 50, was 20 percentage points ahead and over the 40% threshold for an outright win.

Mr Solis - who was narrowly defeated by Mr Arias in Costa Rica's previous presidential vote - was quick to declare Mrs Chinchilla the winner. Critics of Mrs Chinchilla say she is too close to Mr Arias, and that he will continue to control government policies.

The party of Mr Arias, a Nobel Peace Prize winner, has dominated politics for decades in what is one of Latin America's most stable countries.

The Republic of Costa Rica is a country in Central America, bordered by Nicaragua to the north, Panama to the east and south, the Pacific Ocean to the west and south and the Caribbean Sea to the east.

Costa Rica, which translates literally as "Rich Coast", constitutionally abolished its army permanently in 1949. Expenditure on the police corps is about US$17.99 per person.

The BBC News has contributed to the report.