Tony Blair's behaviour regarded  base-spirited as he appears before the Iraq Inquiry in Westminster, but sheers away from public. 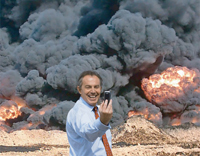 The former prime minister was being grilled on why he took Britain to war in March 2003 despite massive public opposition and serious questions about the legality of the conflict.

He will give evidence, watched in the small inquiry chamber by families of some of the 179 British personnel who died in the conflict.

There was fury among the demonstrators outside the conference centre that the former premier had not faced them as he arrived.

Lindsey German, convener of the Stop The War Coalition, said she was "appalled" that Mr Blair had been driven into the venue by a back entrance.

She said: "He doesn't have the decency or honesty to face up to the public, military families and Iraqis who will be here in huge numbers to show their opposition to the war.

"Sliding in by a back door entrance is typical of his lies, deceit and evasion."

Opinion remains sharply divided over whether ousting Saddam's brutal regime was justified given the enormous human and financial cost.