Bill Gates Worries about the Poor's Health More Than about Environment

Bill Gates, the world's richest man and a leading philanthropist, said on Sunday spending by rich countries aimed at combating climate change in developing nations could mean a dangerous cut in aid for health issues. 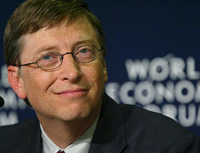 Bill Gates Worries about the Poor's Health More Than about Environment

Participants at the meeting agreed to a target of channeling $100 billion per year to developing countries to combat climate change by 2020. Gates said that amount represents more than three quarters of foreign aid currently given by the richest countries per year.

"I am concerned that some of this money will come from reducing other categories of foreign aid, especially health," Gates wrote in a letter, released late on Sunday, describing the work of his foundation.

"If just 1 percent of the $100 billion goal came from vaccine funding, then 700,000 more children could die from preventable diseases," Gates added.

Taking the focus away from health aid could be bad for the environment in the long run, said Gates, "because improvements in health, including voluntary family planning, lead people to have smaller families, which in turn reduces the strain on the environment."

The Bill & Melinda Gates Foundation, which he runs with his wife Melinda and father William Gates Sr., had an endowment worth $34 billion as of September. Gates, 54, remains Microsoft chairman but focuses his attention on his foundation.

Since starting in 1994, the foundation has handed out more than $21 billion in grants.

According to Forbes magazine, Gates was the richest man in the world in 2009 with an estimated fortune of $40 billion.