Venezuelian Channels Got Punished for Disobedience

The opposition RCTV channel and five other cable TV stations were forced off the air in Venezuela early Sunday after cable operators complied with a government order and refused to carry their signals. 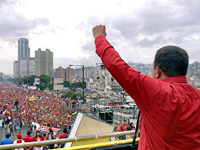 Venezuelian Channels Got Punished for Disobedience

"We have just been taken off the air," said Gladys Zapiain, the communications director for RCTV. "There was no prior notification."

She said all Venezuelan cable operators had dropped RCTV and the other channels, arguing that they had failed to comply with a recent change in government regulations that obliges them to carry speeches by President Hugo Chavez, other officials as well as official government announcements.

These materials are considered government propaganda by Chavez critics and opponents.

It was not immediately clear if the timing of the move by cable operators had been directly influenced by the government.

On Saturday, RCTV refused to comply with new regulation for a second time.

That day, President Chavez addressed thousands of followers in western Caracas, demanding "absolute loyalty" and telling them he embodied the heart and soul of the Venezuelan people.

Venezuela will hold crucial legislative elections in September, in which Chavez hopes to secure at least two thirds of seats to maintain his current legislative majority.

According to opinion polls, the president's popularity, which approached 60 percent approval at the beginning of 2009, stands now at less than 50 percent.

Chavez, a vocal critic of US influence in the region, has held onto power since 1999.