The devastating 7.0-magnitude earthquake that struck poverty-stricken Haiti just over a week ago offers a unique opportunity for reforming the country's economy and institutions, according to a former U.S. envoy to Haiti. 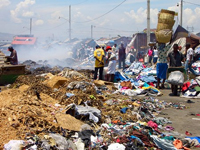 "If we can change some of those underlying factors that inhibit growth -- in particular the weak government -- I think there's a chance for long-term development," James Dobbins told reporters.

He used the country's harbor as an example of the need for more efficient and transparent institutions.

According to the CIA World Factbook, Haiti is the poorest country in the Americas, with about 80 percent of its residents living in poverty. Before last week's quake, the Haitian government had been working to improve the economy -- with the help of the United Nations and other international institutions -- after years of conflict and corruption, including a violent uprising that forced President Jean-Bertrand Aristide into exile in 2004.

"What we need to do is make sure that the additional assistance that's generated by this relief operation works synergistically with the reforms that had been going forward under the earlier operation," Dobbins said.

There are three reasons why he believes there may be a better chance now to reform Haiti than in the past: bipartisanship on the issue in Washington, substantial assistance from the United States and other countries, and a greater willingness in Haiti to embrace change.

"It has undergone shock," he said. "Some of the institutional and social obstacles to reform may now be more movable. The Haitian system itself may be more malleable."

He emphasized the importance of ensuring there is good governance in Haiti.

"It's not simply pouring money into an operating, functioning state," he said. "It's building up the state itself so that we don't have to continue to do for Haiti things that Haitians ultimately can do for themselves."

CNN International as contributed to the report.