India to Scrutinize Airports and Passengers

Indian airports are on high alert after Western intelligence reports warned security officials of a possible attempt to hijack an Indian airliner. 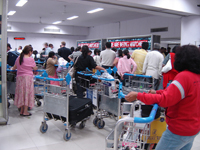 India to Scrutinize Airports and Passengers

Reports say that state-run Air India or other private carriers could be targeted by militant Islamic groups.

The alert comes days ahead of India's annual Republic Day celebrations on January 26.

India has issued a number of terror alerts in the past few years. But security officials say this year they are being particularly vigilant because the information is more specific.

"We have intelligence inputs that there could be a hijack attempt of Indian planes," UK Bansal, a senior home ministry official said.

The alert warns of flights from India or flights originating in neighbouring South Asian countries.

A spokesman for the civil aviation ministry, Moushumi Chakravarty, confirmed the alert had been received.

"The information has been passed on to airport authorities and airline offices," local newspapers quoted her as saying.