The Most Populous U.S. State Is on Alert Because of Storm Forecast 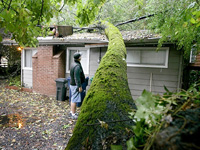 The Most Populous U.S. State Is on Alert Because of Storm Forecast

Officials said they had issued evacuation orders for more than 480 homes in areas prone to mudslides.

"A powerful Pacific storm, likely the strongest of the week, will bring strong and damaging winds to much of southwestern California on Wednesday," the National Weather Service said.

The storm could bring winds of about 80 mph in mountain areas, as well as a downpour of more than 1 inch an hour in parts of Los Angeles County, the weather service said.

Monday's storm was blamed for at least one death, that of a 21-year-old man from Kern County, who died after a 100-foot tree crashed into his home.

Landings and takeoffs were not affected, because a backup system kicked in for some areas, said airport spokeswoman Vikkie Calderon.