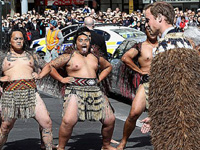 Wearing a traditional Maori cloak, the 27-year-old addressed dignitaries, including Prime Minister John Key, at the ceremony in Wellington.

He described New Zealand as "a nation that believes passionately in itself", but with enduring ties to Britain.

Later, police detained an intruder at a barbecue ahead of the prince's arrival.

Earlier, the prince, who is representing the Queen on his first official overseas visit, said it meant "an awful lot" to him to stand in for his grandmother.

Once inside, William told those gathered: "The overwhelming impression I have is of a nation that believes passionately in itself, in the value of democracy, in each other and other peoples, and in the rule of law."

The prince's speech had focused on maintaining the status quo - with the Queen as New Zealand's head of state - and the word "republic" was never mentioned.

Before the opening ceremony, William watched a group of Maori warriors perform the haka - the chest-beating, tongue-waving greeting reserved for important individuals.

Nga Iwi O Taranaki, leader of the group, said afterwards: "Prince William is a chief and we welcomed him as a chief."

Hundreds of well-wishers turned out to welcome the second-in-line to the throne, but the crowd also included a small number of anti-monarchy activists.

Among them was Kerry Bevin, founder of New Zealand's Republican Party, who used a megaphone to tell those gathered it was "time for Kiwis to control their own destiny".

William later visited the Kapiti Island Nature Reserve, a sanctuary for endangered species, before attending the barbecue at the prime minister's home.