The imam of the central Nigerian city of Jos reports 26 deaths after clashes at the weekend between Christians and Muslims. 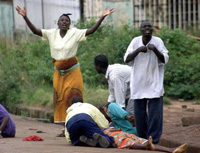 The Nassarawa Gwom district was under a dusk-to-dawn curfew in the wake of the unrest that flared up when Christian youths protested at the building of a mosque in the Christian-dominated neighbourhood.

There was no immediate death toll from the authorities. But the head of Jos's central mosque, Balarabe Dawud, told reporters that 16 bodies had been brought to the mosque, adding to 10 earlier reported dead.

"Eleven of them were buried yesterday and we are conducting a funeral for the remaining five," he said. "So far we have over 300 injured people, most of them from gun shots."

More than 3,000 people were meanwhile sheltering in mosques, churches and police barracks after being displaced from their homes, the Red Cross said.

Security forces searched vehicles and individuals for weapons, as the police claimed that order was being restored.

"Security personnel have succeeded in quelling the unrest and restoring calm in the affected area of the city," Plateau State police spokesman Mohammed Lerema told reporters.

Plateau State information commissioner Gregory Yenlong said the curfew would remain in force "to ensure that no security breach happens."

He added: "The government calls on the people to go about their normal business without fear."