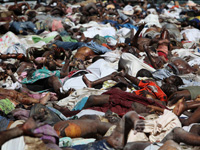 The military escorts would ensure desperately needed food and water was distributed to victims of the humanitarian tragedy without any violence, the world body said.

Secretary-General Ban Ki-Moon told the Security Council the UN needed to strengthen its current Haiti force, which has 7,000 military peacekeepers and 2,100 international police, to deal with the increasing demands following last week's earthquake.

The security council must lift the current ceiling for the force and US deputy ambassador Alejandro Wolff said he expected a draft resolution to be unanimously approved today.

UN peacekeeping chief Alain Le Roy said the extra soldiers were essential because of the "tremendous" number of requests to escort humanitarian convoys.

The US military said today it had airdropped water and food into Haiti after earlier ruling out such a delivery method as too risky.

Military officials are considering whether the method was successful enough to be used throughout Haiti.

Meanwhile, the staggering scope of Haiti's nightmare came into sharper focus as authorities estimated 200,000 dead and 1.5 million homeless in the quake-ravaged heart of the tragic country, where injured survivors still died in the streets, doctors pleaded for help and looters slashed at one another in the rubble.

Six days after the earthquake struck, search teams still pulled buried survivors from the ruins. But hour by hour, the unmet needs of hundreds of thousands grew.

Overwhelmed surgeons appealed for anaesthetics, scalpels and saws for amputating crushed limbs. Hundreds of survivors tried to cram on to buses heading out of town and in city streets while others begged for basics.