Mehmet Ali Agca, who tried to assassinate Pope John Paul II, was released from a Turkish prison today, exciting the world's media with a promise to reveal the full storybehind the attack, almost 30 years ago. 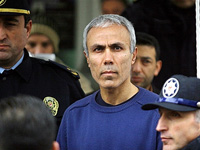 In a statement distributed by his lawyer outside the prison in Sincan, on the outskirts of Ankara, the Turkish capital, Agca declared: "I proclaim the end of the world. All the world will be destroyed in this century. Every human being will die in this century ... I am the Christ eternal."

The 52-year-old has frequently claimed to be the messiah, raising questions about his state of mind.

Agca served 19 years in an Italian prison for the attack before being pardoned at the pope's behest in 2000. He was extradited to serve a sentence in Turkey for other crimes, including the 1979 murder of a newspaper editor.

After his extradition in 2000, Agca was separately sentenced to seven years and four months for two robberies in Turkey in 1979. The authorities deducted his prison sentence in Italy, and several amnesties and amendments of the penal code reduced his term further.

The complex situation led to his wrongful release from prison in 2006, and his reiincarceration eight days later.

Agca shot John Paul II on 13 May 1981, as the pope rode in an open car in St Peter's Square. The pontiff was hit in the abdomen, left hand and right arm, but the bullets missed vital organs. John Paul met Agca in Italy's Rebibbia prison in 1983 and forgave him for the shooting.

Many investigators believe Agca was hired by an east European communist intelligence service to assassinate the pope because of John Paul's opposition to communism. But no connection has been proved, and the late pontiff himself apparently discounted claims that the Soviet KGB and its Bulgarian counterpart plotted to kill him. A trial in 1986 of several of Agca's alleged accomplices failed to prove a link to Bulgaria's secret service.

During his years in jail, Agca became a cult figure for some rightwing Turkish groups. Agca has said that he would answer questions on the Pope's attack in the next few weeks, including whether the Soviet and Bulgarian governments were involved. Agca has also said he is beginning to consider book, film and television documentary offers.

The Guardian has contributed to the report.