Saturday's Tumult in JFK Started from Nothing

On Saturday afternoon, after a potential security breach, travelers were quickly evacuated from a terminal at the John F. Kennedy International Airport. 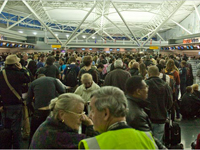 Saturday's Tumult in JFK Started from Nothing

As confirmed by a Port Authority spokesman, a person, who was traveling on a flight from Orlando, walked right through the door that was supposed to be used only by employees, and this set off an alarm across the Terminal 8 at around 3:30 PM.

Passengers from across the terminal, as well as those on three boarded plans on the tarmac, were requested to evacuate. The terminal was re-opened at about 6PM and the travelers then had to go through a long screening process.

The incident was captured on security video but the person had not been found.

No inbound flights had been diverted, and outbound flights at the terminal were expected to be delayed by two hours or more. There were no American Airlines flight cancellations.