Top diplomats from six key powerful countries discussed possible new sanctions against Iran over its nuclear program at a meeting Saturday but reached no agreement. 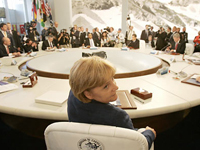 Russian Deputy Foreign Minister Sergei Ryabkov said the six nations want to meet again with Iran to regard their October proposal that Tehran exchange uranium for nuclear fuel. But Robert Cooper, a senior European Union official, said, "We will continue to seek a negotiated solution, but consideration of appropriate further measures has also begun."

The United States pushed for new sanctions against Iran at Saturday's meeting, held at the E.U. offices in New York. Officials from China, Britain, France and Germany also took part in the meeting.

But in a sign of division over the next steps, China sent only a low-level diplomat to the meeting, which was scheduled for senior Foreign Ministry officials. The other five nations sent top officials with decision-making authority.

Diplomats speculated that China's move might have been intended to illustrate its resistance to punishing Iran with more sanctions or its dismay at U.S. arms sales to Taiwan, which Beijing views as a renegade province.

The Security Council has imposed three rounds of sanctions on Iran over suspicions that it is hiding nuclear activities and fears that it could retool its enrichment program, which makes low-grade uranium to generate nuclear power, to produce weapons-grade uranium used for nuclear warheads. Iran denies the accusation and insists its program is for peaceful purposes.