Ukraine: Chronicle of Political Events on the Eve of Elections 2010 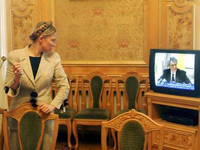 Ukraine: Chronicle of Political Events on the Eve of Elections 2010

Following is a timeline of political events since the mass protests brought pro-Western politicians to power in 2004.

Jan. 23, 2005 - Viktor Yushchenko is sworn in as president after street protests in November and December against a rigged election won by then-Prime Minister Viktor Yanukovich.

March 26, 2006 - Yanukovich's Regions Party emerges as the largest party in a parliamentary election with 186 of 450 seats, but is outnumbered by the combined "orange" score of 243. Orange groups, however, fail to form a coalition after months of talks.

July 18, 2006 - A coalition made up of the president's opponents proposes Yanukovich as prime minister. He is approved a month later after promising not to reverse pro-Western policies.

Jan. 12, 2007 - Yanukovich supporters pass law to reduce Yushchenko's control of the government, a blow to his authority.

July 11, 2008 - Tymoshenko survives a no-confidence vote called in protest at her handling of high inflation.

Nov. 6 - The IMF approves a $16.4 billion loan programme for Ukraine to ease strains from the global financial crisis. Days later it receives its first tranche worth $4.5 billion.

Jan. 20, 2009 - Russian gas reaches Europe via Ukraine for the first time in two weeks after Moscow and Kiev end a prices and debt row that cut supplies to about 20 European countries. Yushchenko says the deal clinched by Tymoshenko is a "defeat".

Dec. 9 - Medvedev says it would be "irresponsible" to amend gas supply contracts with Ukraine, in a sign Moscow will offer no more concessions to its neighbour on gas payments. Yushchenko had asked Russia in November to change the gas supply deal, saying it was too onerous for Ukraine's economy.