Yemen declared open war on al Qaeda on Thursday and warned its citizens against aiding the global militant group, at the same time intervention of foreign military forces is regarded as extremely undesired. 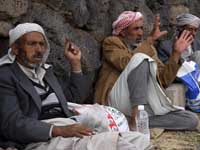 Yemen has come under pressure to act against al Qaeda since attacks on its two main allies, Saudi Arabia and the United States, by militants coming from Yemeni soil.

But facing an array of other threats, weak state control of much of the country, a burgeoning population and a weak economy, analysts say Yemen will need more than military might to stop the country from being a fertile breeding ground for militancy.

The Defense Ministry's online newspaper "September 26," quoting an unnamed security source, said the war was open against al Qaeda militants "whenever or wherever we find those elements."

"The source warned citizens against hiding any elements from the al Qaeda organization, calling for cooperation with the security apparatus and for them to inform on any elements," September 26 said.

Yemeni security forces scoured rugged mountains for a second day using helicopters to hunt for some 25 suspected al Qaeda militants who fled raids on Tuesday in the southeastern province of Shabwa, security sources said. Violence also flared in a separate conflict with Shi'ites in the north.

Yemen had already intensified operations against al Qaeda since a Yemen-based wing of the group said it was behind a failed December 25 attempt to blow up a Detroit-bound U.S. airliner. But the U.S. attack has given the campaign new impetus.

In addition to fighting against al Qaeda in several provinces, Yemen is also battling a northern Shi'ite insurgency and trying to contain separatist sentiment in the south.

The United States and Saudi Arabia fear al Qaeda will take advantage of Yemen's instability to spread its operations to the neighboring kingdom, the world's top oil exporter, and beyond.

Strategically placed on the Arabian Peninsula's southern rim, Yemen is the poorest of all Arab countries and produces only a small amount of oil from shrinking reserves. It also faces a water crisis.

Yemen's population of 23 million is expected to double in the next 20 years. Foreign Minister Abubakr al-Qirbi said on Thursday the country needs about $2 billion a year in aid just to stay afloat and double that to turn its economy around.