Haiti was rocked by strongest earthquake in more than two centuries on Tuesday, which caused dozens of buildings to collapse and raised fears that many people have died, officials and witnesses said. 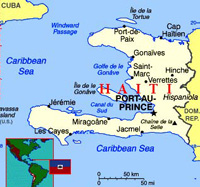 Witnesses reported seeing dead bodies lying on the street and hearing cries for help in the impoverished and crowded capital of Port-au-Prince, located just 10 miles northwest of the earthquake's epicenter, according to the U.S. Geological Survey.

The United States, France, Canada and governments across Latin America were gearing up to help Haiti, after a massive 7.0 earthquake leveled buildings and caused an unknown number of casualties.

US President Barack Obama said his government stood "ready to assist the people of Haiti."

France "expresses its complete solidarity" with Haiti, adding that his ministry's crisis center had begun working "to mobilize and dispatch without delay urgent aid to Port-au-Prince."

Canada, which hosts an 80,000-strong Haitian community, said it was "deeply concerned" with events unfolding in Haiti.

Brazil's President Luiz Inacio Lula da Silva said he was "very concerned" with the situation in Haiti, including the fate of some 1,200 Brazilian members of the 7,000-strong UN Stabilization Mission in Haiti, known as MINUSTAH, which Brazil leads.

A MINUSTAH employee in Haiti told reporters that the force's headquarters had been largely destroyed in the quake.

Colombia was "under alert and ready to respond to the Haitian authorities' call for help."

Venezuela said it would send a 50-member "humanitarian assistance team" to Haiti in the next few hours.

In Panama, the country's Vice President Juan Carlos Varela pledged that his government would provide assistance to the United Nations's Office for the Coordination of Humanitarian Affairs.

Peru said its 205 peacekeeping troops in MINUSTAH would help in rescue efforts in Haiti, adding that none of the soldiers was injured in the quake.

Mexico's foreign ministry said it was keeping close watch on Haiti and had "activated a protection plan for Mexicans facing an emergency" in Haiti.

In the Dominican Republic, which shares the island of Hispaniola with Haiti, President Leonel Fernández called on the international community to help Haiti overcome a "real tragedy." He said his government was at the ready to send assistance.

A government spokesman said a Dominican Air Force plane was ready to pick up quake victims and that it was sending a team of sniffer dogs to search for victims in the rubble.

Meanwhile, in nearby Cuba -- only 80 kilometers (50 miles) from Haiti -- people in the eastern coastal town of Baracoa were evacuated to higher ground as a precaution, after the earthquake triggered a tsunami alert, the civil defense agency said.

The tsunami alert was lifted later, but Cuba said it "remains vigilant for possible aftershocks and rising sea levels in the eastern provinces," an agency statement said.

The initial quake was felt in Cuba's eastern province of Santiago de Cuba.