Dispute over the use of the word "Allah" by non-Muslims in Malaysia resulted in damaging two  churches. 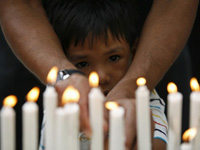 As Muslim groups prepared to hold protests Friday, police stepped up security around churches nationwide after one in suburban Kuala Lumpur was fire-bombed in a midnight attack that gutted its ground floor and another had its grounds set ablaze.

"We are investigating the matter thoroughly and those responsible will be brought to book," police chief Musa Hassan told reporters.

Police will deploy patrol cars to patrol churches in the country. A fire department official said all stations were on alert for more blazes at religious buildings, amid conflict over the use of "Allah" as a translation for "God" by Christians.

Pribumi Perkasa, one of the groups organising the demonstrations to be held after Friday prayers, condemned the attacks but warned that Muslim Malays, who dominate the population, were deeply concerned.

"We will continue to voice our feelings in protests today because you cannot stop the outflow of feelings on this issue," the group's president, Ibrahim Ali, told reporters.

"I think it may have been because of restricting Muslims from voicing their anger and fears that the church attacks took place. You must understand that if Muslims are unhappy, I'm sure there will be no peace in this country."

The High Court last week ruled in favour of the Catholic "Herald" newspaper which has used "Allah" as a translation for "God" in its Malay-language section. The government has said the word should be used only by Muslims.

The ruling was suspended on Wednesday pending an appeal, after the government argued the decision could cause racial conflict in Malaysia, where Malays make up 60 percent of the population.

The ground floor of the three-storey Metro Tabernacle church, part of the Assemblies of God movement, was destroyed in the attack.

"Witnesses saw four people smash the glass and throw incendiaries into the church building. They came on two motorcycles," church leader Peter Yeow told reporters, warning other churches to "double their guard" against any attacks.

There were no casualties in the attack on the church, which occupies the corner lot of a row of shop houses and which Yeow said draws some 1,500 people weekly.

Several hours later, the Catholic Church of the Assumption in Kuala Lumpur's southwest was targeted, parish priest Philip Muthu said. He was awoken by men riding on motorcycles who threw a kerosene bomb into the church compound, according to his words.

Religion and language are sensitive issues in multiracial Malaysia, which experienced deadly race riots in 1969.

The row over the use of "Allah" is among a string of religious disputes that have erupted in recent years, straining relations between Malays and minority ethnic Chinese and Indians who fear the country is being "Islamised."

More than half of Malaysia's Catholics are from indigenous groups, most of whom live in the Borneo island states and who mainly speak Malay.