Whom Will East Jerusalem House ? 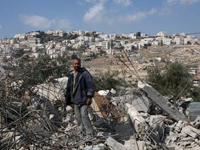 Whom Will East Jerusalem House ?

The Palestinians claim east Jerusalem for a future capital and want all construction there stopped before negotiations resume. The project is being developed near a Jewish seminary by Irving Moskowitz, an American Jew who has generously funded Jewish settlers determined to cement Israel's hold on contested areas of the holy city.

Palestinian negotiator Saeb Erekat condemned the move "in the strongest possible terms." He said if Israel wants to resume peace talks, "they must announce a total cessation of settlement activities" in east Jerusalem and the West Bank. Israel committed to a full settlement freeze in 2003 under an internationally backed peace plan.

An official in Netanyahu's office said the decision to build in east Jerusalem is made by municipal authorities and does not require involvement by the prime minister. He could not be identified under civil service regulations.

Israel captured east Jerusalem, along with the West Bank, from Jordan in the 1967 Mideast war.

It does not consider construction in east Jerusalem to be settlement activity because it annexed the area immediately after its capture. The international community, like the Palestinians, does not recognize the annexation and views the Jewish neighbourhoods built in east Jerusalem as settlements.

Some 180,000 Jews live in those neighbourhoods, alongside an estimated 250,000 Palestinians.

The Obama administration's special Mideast envoy, George Mitchell, is due in the region in the next few days to try to break the negotiations logjam.