Resumption of Air Traffic between Russia and Georgia Goes Hard

Russia has authorised the first direct flights from the Georgian capital of Tbilisi since the two countries' brief war in August 2008, the transport ministry said. 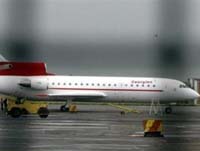 Resumption of Air Traffic between Russia and Georgia Goes Hard

"The decision was taken to authorise Georgian Airways company charter flights on December 29 and 30," said a ministry statement cited by agencies.

The flights would serve Moscow and Saint Petersburg.

Direct flights have been suspended since the two countries went to war over the Russian-backed separatist Georgian region of South Ossetia.

The ministry had also asked the Georgian airline about its transport needs for charter flights between January 5 and 10, which are public holidays in Russia.

But Georgian Airways, which last week had asked Russia to lift its flights embargo, said that no charter flights would be done on December 29 and 30.

"As we have obtained the authorization too late, we will not have the time to organise flights tomorrow and the day after tomorrow," Georgian Airways' spokeswoman Nino Girgobiani told reporters.

"The charter flights will be launched between January 6 and 25, from Tbilisi to Moscow and Saint-Petersburg," Girgobiani said.

But they had not received a Russian response concerning regular flights, she added.

Moscow's announcement was the latest sign of an easing of tension in relations between the two countries.

On Thursday, Georgia and Russia announced they had agreed to re-open their land border to traffic.

Russian President Dmitry Medvedev hinted at a thaw in relations with Georgia this month, saying he saw "no obstacles" to opening the border crossing and resuming flights between Russia and Georgia.

Russia cut air links with Georgia during the war, only four months after they had resumed following an 18-month embargo.