Thousands of saffron-robed Thai monks chanted and prayed for victims of the Indian Ocean tsunami on Saturday as Asia marked the fifth anniversary of one of history's worst natural disasters. 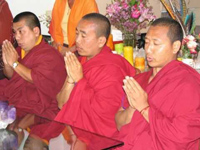 The gathering of monks in Ban Nam Khem, a small fishing village on Thailand's Andaman Sea coast that lost nearly half its 5,000 people, was one of hundreds of solemn events across Asia in memory of the towering waves that crashed ashore with little warning on December 26, 2004, killing 226,000 people in 13 countries.

"All souls from all nationalities, wherever you are now, please receive the prayers the monks are saying for you," said Kularb Pliamyai, who lost 10 family members in Ban Nam Khem.

In Indonesia's Banda Aceh, survivors gathered in neighborhood mosques or homes on the eve of the anniversary to remember those killed by the wall of water as high as 30 meters triggered by an undersea earthquake off the island of Sumatra.

Indonesia was the worst hit with the number of dead and missing over 166,000. Massive reconstruction aid in Banda Aceh has rebuilt a new city on top of the ruins, and many survivors are only now putting memories of the waves behind them.

"The psychology of the Acehnese people is starting to recover after five years," said Eva Susanti, who lost 125 members of her extended family in the Banda Aceh area.

Some locals such as Taufik Rahmat say they have moved on, helped along by new homes in the Banda Aceh region following one of the largest foreign fund-raising exercises. But still pockets of people in his village remain homeless.

"Not all elements have been fulfilled, I think about 80 percent to 90 percent of the people still don't have proper housing," he said.