Malls Are Overcrowded with Last-minute Shoppers before Christmas

Malls are crowded today as last-minute shoppers cross off their Christmas gift list. 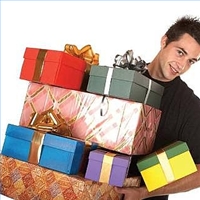 Malls Are Overcrowded with Last-minute Shoppers before Christmas

In an effort to make these last-minute shoppers happy, retailers opened shop a bit early to help ease the panic. However, most stores will close by 6 p.m. Christmas Eve.

CTV Toronto reporter Janice Golding spent Thursday morning at the Vaughan Mills shopping centre and said the mall was not quite as busy as she expected it to be.

She did say however, that it appears men are the worst when it come to leaving things until the last minute, CTV.ca reports.

Meanwhile, it’s generally understood that anyone who ventures to the mall on Christmas Eve isn’t indulging a whim for window shopping.

That’s what David Genson intended on Thursday morning at Naples’ Coastland Center mall. He snapped up several bags of goodies for his fiancee, whom he will wed in March, and plans to enjoy “a wonderful Christmas” together, he said.

Genson always postpones his holiday shopping until the final day.

“I think most men do,” said the Naples resident. “I see more men in there than women,” Naples Daily News reports.

It was also reported, retailers at St David's shopping centre in Cardiff said the number of people heading for the complex on Christmas Eve had exceeded all expectations.

"We estimate that we've had more than a million shoppers a week through the doors in December and our stores are already reporting some of their strongest pre-Christmas sales," said shopping centre director Steven Madeley.

Jonathan de Mello, director of retail at Experian, said the ongoing trend for shopping in December this year had been "very disappointing" for retailers compared with December 2008.

"This has led to a worrying spate of panic discounting among retailers on Christmas Eve - traditionally the biggest shopping day of the year - which will undoubtedly impact their profit margins," he said, BBC News reports.