Santa Claus has a doctorate from N.Y.U. He speaks a little German, a little French and a little Spanish, but his Russian is spotty. Santa lives in a rent-controlled apartment on the Upper West Side. He hosts a free Thursday night film series at Rutgers Presbyterian Church on West 73rd Street. 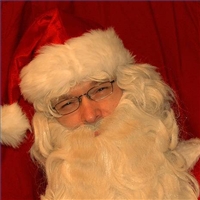 Naturally, he has been too busy lately to lecture about the movies. From the day after Thanksgiving to Christmas Eve, he spends most of his days at the South Street Seaport, strolling the cobblestone streets and posing for pictures on the third floor of the Pier 17 shopping mall. He has greeted Bill Clinton, the former president of the United States; Rudolph W. Giuliani, the former mayor of New York City; and, one recent afternoon, Ashley Pacheco, age 5, of Public School 126 on the Lower East Side.

Ashley’s mother, Mariluz Otero, 25, brought Ashley to Pier 17 for a sort of grade-school intervention: She worried that Ashley was starting to believe that there was no such thing as Santa Claus. “People are telling her things,” Ms. Otero said, The New York Times reports.

It was also reported, every day, kids crowd around the green velvet chair in which he sits, resplendent, and flanked by two large toy soldiers. At his weekly story session Sunday, a mother casually plopped her 4-year-old son into his lap, while others clambered onto his chair as he read “The night before Christmas” complete with voices, hand gestures and whistles. He can say “Merry Christmas” in 7 different languages, including sign language, and in 21 years of hosting the regular tree lighting show at the Seaport, he said he has not once forgotten his lines.

When talking about his work, his whole body, despite the fact that he now walks with a cane — “perfect for the character,” he said — becomes animated, and his bright blue eyes, along with the bells on his clothing, twinkle.

Franklin takes it easy during the other 11 months of the year. He still does the occasional voice over, and he organizes movie nights for the seniors at his church. But as the festive season approaches, he starts to look forward to donning the red suit, Downtown Express reports.

Meanwhile, the modern idea of Santa Claus came into being from Clement Clarke Moore’s poem in 1822 titled “A Visit From St. Nicholas,” which was later changed to “The Night Before Christmas” for his three daughters.

The poem, which created a new and popular American icon, is largely responsible for our modern image of Santa Claus as a “right jolly old elf” with a portly figure and the supernatural ability to ascend a chimney with a mere nod of his head. Although some of Moore’s imagery was probably borrowed from other sources, his poem helped to popularize Christmas Eve and Santa Claus.

In the poem, Santa Claus was waiting for the children to get to sleep so he could fly from house to house on Christmas Eve in “a miniature sleigh” led by eight flying reindeer, whom Moore also named, leaving presents for deserving children.

In 1881, political cartoonist Thomas Nast drew on Moore’s poem to create the first likeness that matches our modern image of Santa Claus. His cartoon, which appeared in Harper’s Weekly, depicted Santa as a rotund, cheerful man with a full, white beard, holding a sack laden with toys for lucky children. It is Nast who gave Santa his bright red suit trimmed with white fur, North Pole workshop, elves and his wife, Mrs. Claus.