People Gather in Bethlehem for Christmas

President of Israel Shimon Peres on Thursday wished the Christian world a merry Christmas and a peaceful new year, as religious leaders ushered in holiday celebrations in the Holy Land. 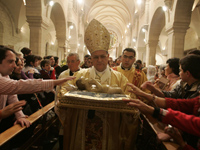 People Gather in Bethlehem for Christmas

"I want to wish each of you and all of you - all of us - a happy [and] merry Christmas," Peres said in a clip he posted on his YouTube channel. "Let's pray that the next year will be a year of peace, of brotherhood, of tolerance of affluence."

Also Thursday, the head of the Roman Catholic Church in the region set out on the annual Christmas procession from Jerusalem to Bethlehem.

Latin Patriarch Fouad Twal's motorcade left his headquarters in the Old City of Jerusalem and set out slowly on the 8.5-kilometer-long journey southwards to Bethlehem's central Manger Square.

Twal, a 69-year-old Jordanian who was appointed Latin Patriarch last year, is to lead the Midnight Mass at Bethlehem's early medieval Church of the Nativity, built according to Christian tradition on the site of the stable where Jesus was born.

Thousands of Christian pilgrims from all over the world, as well as local Palestinian and Arab-Israeli Christians, have flocked to Bethlehem for the service, which will also be attended by Palestinian President Mahmoud Abbas and other officials.

Ha'aretz has contributed to the report.