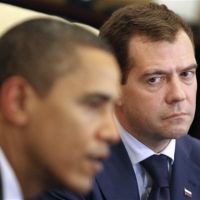 The government will have to reduce Interior Ministry personnel by 20% by January 1, 2012.

He also ordered the closure of two ministry departments and the rotation of senior personnel.

Medvedev said earlier on Thursday that the ministry "undoubtedly needs major, drastic changes, and they will be undertaken. But we must preserve the core of the ministry's staff, those who are capable of responsible work," RIA Novosti reports.

''We need sharp and serious changes,'' Medvedev said in a live interview with heads of three Russian television stations Thursday.

Critics accuse the Interior Ministry of creating a system under which financial rewards and police promotions are often based on crime-fighting results that can be easily faked and manipulated, The New York Times reports.

News agencies also report, endemic bribe-taking and documented cases of torture while in custody have earned the police a fearful reputation in Russian society and many crimes are simply not reported for fear of coming into contact with the force.

"People want to be protected by policemen who are flawless morally and, what is more important, impeccable from the legal point of view, people who can be trusted," Medvedev said. "I am confident we will be able to create such a structure."

Under the plans, Medvedev ordered a reform of the ministry and better procedures to root out corruption and to vet candidates.

Previous attempts to reform Russia's notorious bureaucracy have failed and opponents of the Kremlin have criticized Medvedev for failing to root out corruption, as he promised after becoming president in 2008, Reuters reports.