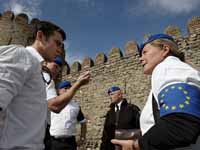 Hansjoerg Haber said Russia has not met an obligation to withdraw its forces to positions held before the August 2008 conflict.

Russia also has refused to let EU monitors enter Georgia's breakaway provinces of Abkhazia and South Ossetia, he said. Moscow has recognized the regions as independent states and kept thousands of troops there.

Only Venezuela, Nicaragua and, most recently, the South Pacific island nation of Nauru, has followed Russia's example in recognizing the breakaway regions as independent states.

The EU sent 200 monitors to patrol areas near Abkhazia and South Ossetia, where tensions have persisted with periodic arrests and claims and counterclaims of illegal activity.

On Wednesday, a group of EU monitors visited the village of Zegduleti in the Gori region near South Ossetia.

Shiukashvili said the region has been struggling economically after the war, which deprived residents of Zegduleti and other neighboring villages of the opportunity to sell apples and other fruit to neighboring Russia. He said that the villagers also have suffered a shortage of fresh water, which had been delivered from South Ossetia before the war.

Local villagers welcome the EU patrols. "When I see EU monitors, I feel relieved," said Malkhaz Tservadze, a 61-year old resident of Zegduleti. "They are on a peaceful mission to ensure our safety."