Santa Claus is Angel-Like in a Way

Santa Claus is already airborne and U.S. air defense forces are keeping tabs on him as they have every Christmas Eve for more than 50 years. 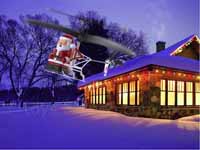 Santa Claus is Angel-Like in a Way

The tradition began in 1955 after a Colorado Springs department store printed the wrong phone number in an ad telling kids how to reach Santa.

Instead of dialing St. Nick, callers were put through to the Colorado-based Continental Air Defense Command operations "hotline."

Rather than slam down the phone, the director of operations at the time, Col. Harry Shoup, had his staff check the radar for Santa's movements and provide callers with updates on his location. NORAD says.

The tradition, using volunteers, continued when the U.S. and Canada formed the joint North America Aerospace Defense Command in 1958.

Everyone can track Santa's flight, one just needs to send an e-mail to NORAD at [email protected]

The USA Today has contributed to the report.