Russia Being Honest with U.S. on Missile Issue

Russia openly admits that development of strategic offensive forces is essential part of its defensive politics against external aggression. 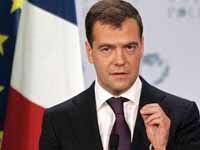 Russia Being Honest with U.S. on Missile Issue

Medvedev said that Russia and the United States were close to a landmark deal on cutting arsenals of Cold War nuclear weapons, but that Moscow would still push ahead with the development of new strategic offensive weapons.

"Of course, we will develop new systems, including delivery systems, that is, missiles," Medvedev told the directors of Russia's three main state-controlled television channels.

Medvedev said Washington and Moscow had agreed most of the remaining issues for a deal to replace the 1991 Strategic Arms Reduction Treaty (START I), which led to the biggest reduction in nuclear weapons in history.

"Despite the fact that we will prepare and sign this treaty, we will nevertheless develop our strategic offensive forces because without this there is no way to defend our country," Medvedev said, several hours after the armed forces test-fired a nuclear capable missile.

The new missiles would be developed in full accordance with arms agreements made with the United States, he said.

The Kremlin chief said U.S. President Barack Obama's idea for a nuclear-free world was "beautiful and right" but cautioned that it would take time.