No one was hurt after an eight-hour hostage standoff. It finished late Wednesday when an armed, disabled man wheeled himself out of a Virginia post office and was taken into custody, according to the mayor of Wytheville. 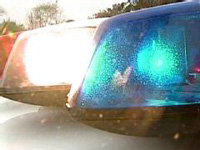 The gunman is disabled, Mayor Trent Crewe said, adding that police told him the gunman entered the post office pushing a wheelchair. It was unclear what the purpose of the wheelchair was, Crewe said.

There were reports the man had a "device," and it appeared that his car, parked outside the office, was equipped with some type of device as well, Crewe said.

"The police authorities have told me they are acting on the assumption there is an explosive device of some kind in some location," Crewe said, though they could not confirm any explosives.

The surrounding area of downtown Wytheville has been evacuated within a three- to four-block radius.

The suspect asked for pizza but made no other demands, U.S. Postal Inspection Service spokesman Peter Rendina said.

The gunman's motive was unclear. He had not identified himself but he has told police he has a military background, Crewe said. Police have yet to confirm whether the gunman has military training.

Agents with the FBI and the Bureau of Alcohol, Tobacco, Firearms and Explosives were also on scene, Crewe said.

Wytheville is a small town in southwestern Virginia in the foothills of the Blue Ridge Mountains. It has a population of just over 8,000.

CNN News has contributed to the report.