German Mediator arrives in Gaza for Talks on Prisoner Swap

An editorial published in Al-Quds Al-Arabi early Wednesday says, Hamas must not accept Israel's latest offer in negotiations for a prisoner exchange deal to secure the release of St.-Sgt. Gilad Schalit. 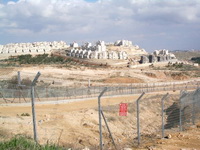 German Mediator arrives in Gaza for Talks on Prisoner Swap

"The biggest error Hamas could possibly commit would be to accept [Israel's] conditions for the release of [Palestinian] prisoners, either to the Gaza Strip (West Bank residents) or to exile in Europe," said the London-based newspaper. Hamas, it said, "must hold firm in its refusal to conditions and pressure exerted by Israel and the West, even if this leads to the collapse of the deal."

Prime Minister Binyamin Netanyahu was using "tough conditions" to try and lure the Palestinian side into making concessions demanded by "angry far-right parties that form the backbone of the [Israeli] coalition," the London-based paper asserted.

The report stated that Hamas was aware of the Israeli negotiating strategy and was therefore "insisting on its position and avoiding the need to make any concessions," both in terms of the number of prisoners to be freed and the conditions for their release, The Jerusalem Post reports.

It was also reported, a Hamas official says the German mediator seeking to clinch a prisoner swap between the militant group and Israel has entered Gaza.

The official said Wednesday that the mediator was delivering Israel's latest offer in a proposed deal to trade some 1,000 Palestinian prisoners for one Israeli soldier.

The official spoke on condition of anonymity because he wasn't authorized to speak to the media.

He said Gaza's Hamas rulers will consider the offer and forward it to the group's Syria-based leadership before the announcing a position, The Associated Press reports.

News agencies also report, Gaza sources told Ynet that Hamas may find away to elasticize his stance on the list, but will demand the deportation be temporary.

A source closed to Hamas' negotiation team stressed the group will consider "all political and humane" aspects of the talks prior to making its decision.

The 170-name list – out of which Israel was to choose 125 – was the focus of the series of hectic meeting held by the special seven-minister cabinet over the past week.