Pope Benedict XVI has described his visit to the Holocaust memorial as an upsetting encounter with cruelty and senseless hatred. 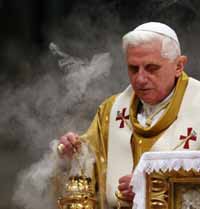 The pontiff made his remarks in a Vatican speech Monday, just days after his decision to move the wartime Pope Pius XII closer to sainthood angered Jewish groups.

Benedict signed a decree Saturday on the virtues of Pius, who has been criticized for not doing enough to stop the Holocaust. The decree means Pius can be beatified once a miracle attributed to his intercession has been recognized. Beatification is the first major step before possible sainthood.

The pope said his May visit to the Yad Vashem, in Jerusalem, was "an upsetting encounter with the cruelty of human fault," and with "the hatred of a blind ideology."