Ayatollah Hossein Ali Montazeri, a pillar of the Islamic Revolution three decades ago who became a staunch defender of the nation's current opposition movement, died late Saturday of complications from advanced age, diabetes and asthma, his doctor told state television. He was 87. 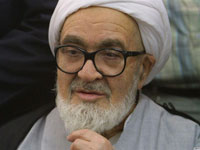 His death could further galvanize the protest movement that grew out of disputed presidential elections in June but that has been driven as much by raw emotion over perceived injustice as by rational political calculation.

Montazeri was an important figure in Iran's post-revolutionary period, a widely respected and creative Islamic jurist and political theorist. He had been slated to take over as the country's supreme leader before a falling-out with Ayatollah Ruhollah Khomeini, the founding father of the Islamic Republic, over killings of political prisoners in the late 1980s. Montazeri became a harsh and defiant critic of the revolution he helped create.

"Ayatollah Montazeri will be remembered in the history of Iran as brave, open-minded and willing to say the truth at any time, even when encountering danger," Fazel Maybodi, a mid-ranking reformist cleric and a well-known disciple of Montazeri, said in a telephone interview from the city of Qom, the country's religious center, Los Angeles Times reports.

Montazeri, 87, died in his sleep and was buried in the shrine of Masoumeh, a revered Shiite figure, in Qom. He was a pillar of the 1979 Iranian revolution and the designated successor of Ayatollah Ruhollah Khomeini until he began criticising Iran's human rights record and fell out of favour.

Since June's hotly-disputed election he had been one of the regime's most powerful and outspoken critics, using his authority as the leading Shia theologian in Iran to argue that it had no political or religious legitimacy and condemning its use of violence, torture and forced confessions. He said Iran was no longer Islamic or a republic.

The regime ordered newspapers in Tehran not to print front-page photographs of Montazeri or carry condolence messages, but Mr Mousavi and Mr Karoubi declared today a national day of mourning.

Hassan Khomeini, grandson of Ayatollah Khomeini, said Montazeri had "spent many years of his honourable life on the path of advancing the high goals of Islam and the Islamic revolution". Shirin Ebadi, the human rights activist and Nobel prize laureate, called Montazeri "the father of human rights in Iran", Times Online reports.

Tens of thousands of Iranian mourners--many chanting protest slogans--joined the funeral procession Monday for Grand Ayatollah Hossein Ali Montazeri, who had described government crackdowns as the work of power-hungry despots.

Iranian authorities have barred foreign media from covering the processions in the holy city of Qom for Ayatollah Montazeri. But witnesses said many mourners shouted protest cries including "Death to the Dictator" in displays of anger against Iran's ruling establishment.

There were no immediate reports of serious clashes from the witnesses, who spoke on condition of anonymity because of fears of arrest by Iranian authorities. Some opposition Web sites noted scuffles and violence, but the reports couldn't immediately be confirmed.

On Monday, access to the Internet in Iran was slow, and cellular telephone service was unreliable. The government has periodically restricted communications in an attempt to prevent protesters from organizing, Wall Street Journal inrorms.