Millions of people along the East Coast were bracing for potentially dicey commutes as they returned to work Monday after a weekend winter storm dropped record snowfall, interrupted holiday shopping and stranded travelers. 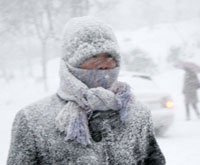 The storm crept up the coast on Saturday and Sunday, walloping states from the mid-Atlantic to New England , causing hundreds of delayed or canceled flights, widespread power outages and treacherous driving conditions. The weather was blamed for several deaths in North Carolina and Virginia.

But despite its powerful punch, many took solace in the timing of the storm and the knowledge that it could have been worse had it come during the work week. The weekend arrival helped minimize headache-inducing commutes and reduced frenzied efforts to dig out the car before heading for work, The Associated Press reports.

In New York, the brunt of the storm hit Long Island, bringing whiteout conditions and dropping 26.3 inches in Upton, a record since measurements began in 1949.

Nearly 11 inches fell on New York City, and the storm could be the worst the city has seen since 26 inches fell in February 2006, National Weather Service meteorologist Patrick Maloit said.

Even as the storm wound down in the New York area, conditions remained treacherous and drivers were advised to stay off the roads, Maloit said. Bus, subways and trains were delayed -- including a Long Island Rail Road train stalled for more than five hours before backing up and unloading its 150 passengers.

Airports in the Northeast that were jammed up Saturday were working their way back to normal. About 1,200 flights in the New York City area's three major airports remained canceled despite clear conditions on the runways, The Los Angeles Times reports.

According CNN, airlines were scrambling to accommodate passengers affected by the cancellation of hundreds of flights after a monster weekend winter storm that blanketed a swath of the East Coast.

In addition to refunds, a spokesman for Delta Air Lines said the company is providing a weather waiver that allows passengers to reschedule without a penalty if they were scheduled to travel before Christmas.