The chief executive of Eurostar has said lessons will be learned after five trains broke down in the Channel Tunnel on Friday night, trapping 2,000 passengers. 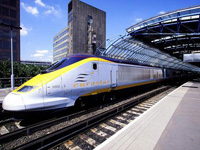 Many spoke of extreme temperatures and a lack of food, water and toilet facilities.

Richard Brown said he had no plans to resign but wanted to focus on ''getting the service back''.

The Channel Tunnel, known colloquially as the Chunnel, is a 50.5-kilometre (31.4 mi) undersea rail tunnel linking Folkestone, Kent near Dover in the United Kingdom with Coquelles, Pas-de-Calais near Calais in northern France beneath the English Channel at the Strait of Dover. At its lowest point it is 75 metres (250 ft) deep. At 37.9 kilometres (23.5 mi), the Channel Tunnel has the longest undersea portion of any tunnel in the world although the Seikan Tunnel in Japan is both longer overall, at 53.85 kilometres (33.46 mi) and deeper, at 240 metres (790 ft) below sea level.

The tunnel carries high-speed Eurostar passenger trains, Eurotunnel Shuttle roll-on/roll-off vehicle transport—the largest in the world—and international rail freight trains. The tunnel connects end-to-end with the LGV Nord and Channel Tunnel Rail Link high-speed railway lines. In 1996 the American Society of Civil Engineers identified the tunnel as one of the Seven Wonders of the Modern World.
BBC Newsw has contributed to the report.