U.S. Trials to be Broadcasted for Public's Benefit

Video cameras, long banned from most federal courtrooms in U.S., could be used in civil trials throughout the West under a new rule in the federal judiciary’s Ninth Circuit. 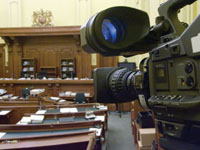 U.S. Trials to be Broadcasted for Public's Benefit

The move was announced Thursday by Alex Kozinski, the chief judge of the United States Court of Appeals for the Ninth Circuit. He called the move an “experiment” that “is designed to help us find the right balance between the public’s right to access to the courts and the parties’ right to a fair and dignified proceeding.”

Currently, the only federal district courts that allow television cameras are in New York State, in the Southern and Eastern Districts. The new rule would allow cameras on a limited basis in California, Arizona, Nevada, Oregon, Washington, Idaho, Montana, Alaska and Hawaii, along with two territories.

Courtroom cameras would still be prohibited in criminal cases and jury trials, leaving only civil nonjury matters for video capture.

The chief judge of each district in the circuit will decide which cases will allow cameras, in consultation with Judge Kozinski.

Many state courts routinely allow cameras, with decidedly mixed results. Many legal analysts blamed cameras for much of the circus atmosphere that pervaded the murder trial of O. J. Simpson.

The goal of the experiment, Judge Kozinski said in his statement, is public education.

“We hope that being able to see and hear what transpires in the courtroom,” he said, “will lead to a better public understanding of our judicial processes and enhanced confidence in the rule of law.”

Others jurists are skeptical of the value of cameras. Legal experts said the decision could prompt other circuits to do the same, possibly leading to a broad expansion of televised federal trials.