Pakistani Politics Disgraced Themselves by Corruption

The political crisis in Pakistan has deepened after the government's anti-corruption agency had started investigation of unlawful actions of high officials of the country. 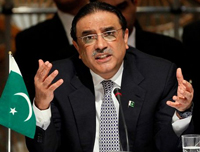 Pakistani Politics Disgraced Themselves by Corruption

Officials from the National Accountability Bureau asked for permission to arrest the country's interior minister Rehman Malik in charge of law and order and the war on terror within Pakistan.

A number of other leaders of the ruling Pakistan Peoples Party were also summoned to appear before the courts over long-standing corruption charges.

The supreme court also urged the government to invite the Swiss government to reopen money laundering cases against President Zardari.

The scale of the crisis and the speed with which it has unfolded has prompted supporters of Mr Zardari to question the role of the judiciary and speculate on whether the army is behind the legal challenge to the government.

"It's complete (judicial) control now," said Asma Jahangir, chair of the Human Rights Commission of Pakistan. "The issue is whether the (democratic) system is going to pack up again. Why is the judiciary again being used by the establishment?"

The National Accountability Bureau, the official anti-corruption watchdog, applied for an arrest warrant for interior minister Rehman Malik, over corruption allegations going back over a decade.

The court has summoned Mr Malik to appear in January, after his lawyer gave an assurance the interior minister would attend the hearing.

Mr Malik had three cases dropped under the amnesty. One of the allegations is the "embezzlement of funds on account of unauthorised release of imported Yellow Cab Cars", according to documents given to the Supreme Court. The sum involved is listed as $165,000 (about £100,000).

On Thursday, the defence minister, Ahmed Mukhtar was physically prevented from boarding a flight for an official visit to China. The two ministers are key contacts for Western allies for Pakistan's role in the anti-terror fight.

Mr Malik, Mr Mukhtar and President Asif Zardari were all beneficiaries of NRO, which saw corruption charges wiped away for hundreds of people.

PPP leaders suspect the judiciary has collaborated with the military in a move to oust President Zardari, who is unpopular among Pakistan's establishment. The army has repeated denied it has any intention to interfere in politics.

"It seems to me that Zardari's administration has lost its moral authority to govern. Power is slipping away," said leading commentator Najam Sethi.

The Telegraph.uk. has contributed to the report.